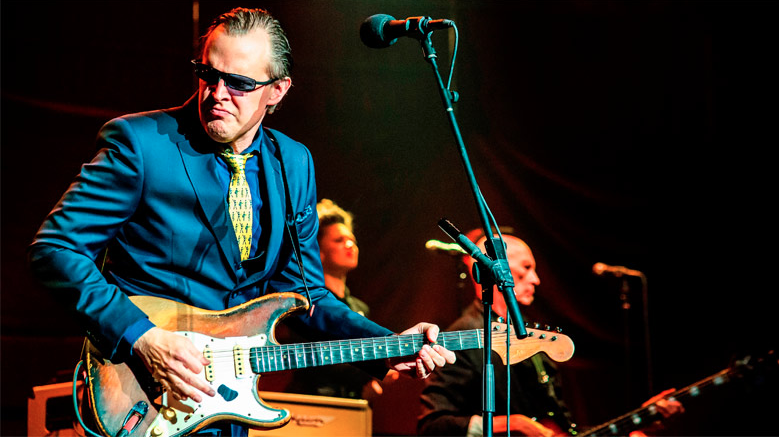 The blues-rock guitar icon on slide, Redemption and hanging up his axe

He’s one of the world’s hardest-working guitarists and an on-the-level ’Burst-wielding hero to an army of fans. But Joe Bonamassa is the first to admit that flying high attracts a lot of flak, too.

Principled, introspective and still obsessed with guitars, the man behind the mirrored shades is probably not who you think he is. As Joe contemplates a future in which he may even quit music, we join blues rock’s king of the hill…

Backstage at Plymouth Pavilions, Joe is gazing at the walls of his dressing room, reflecting on his future in music.

“The picture on the wall was hanging there last time we were here,” he observes. “That was two years ago. It fucking seems like yesterday. If you work at a certain pace, you blink your eyes and you’re 40. Actually, I’ll be 42 in a few months. That can’t be how it works because one day you wake up and you’re 70 and you’re, like, ‘Oh, shit.’ Bash out the blues-rock… and that’s it? It’s been wonderful throughout, even during the skint times and whatever. It’s a wonderful way to make a living… But in every person’s life there’s an Act Two,” he reflects.

“I’m 30 years into this thing and between the live records and everything else, there are 38 albums out, 21 of which have gotten to No 1,” he adds. “I don’t need to make another record, ever… But what I want to do is start ticking off a bucket list of things I want to accomplish and statements I want to make before I hang it up. I don’t know. I’m not the guy who is going to be around in maybe 10 years or certainly not in 20.”

To Bonamassa’s detractors, his relentless tours and album releases are evidence that it’s all about the money, not the music.

Joe’s response to that, figuratively speaking, is a phlegmatic shrug. He knows that success brings accusations of selling out – but he certainly doesn’t seem like a man with a faulty moral compass when it comes to musical integrity.

“It has to feel right and it has to be honest,” he concludes. “The fans that have been with me since day one expect an honest gig. And if it isn’t an honest gig, then what the fuck am I doing?

“I know people just begrudgingly go out there every night and turn out the hits. You’re like, ‘Man, you’re lucky to have a hit. I’ve never had a hit song.’ [And they’ll reply by saying,] ‘You don’t know what it’s like.’ I never will, but okay, the grass is always greener. I get it. It’s a drag sometimes. But to just rack up the stats doesn’t do it for me. It shouldn’t do it for anybody else. But I know for some people it’s all about being carved into the classic-rock Mount Rushmore and it’s all about legacy and bullshit.”

Likewise, Joe is ambivalent about the effect of social media on the world of guitar music, citing it as a distraction.

”Nature of social media posts means that guitarists get reduced to memes rather than artists with a decades-wide career. “The way that [social media] culture works is your entire life’s output, career…everything that you’ve done for almost 38 years now, since Santa brought me a guitar when I was four, is judged on a 55-second Instagram video,” he says.

Perhaps appropriately, soul-searching is the central theme of Bonamassa’s latest album, Redemption. Everyone who heard it in the office remarked that Joe seems to have dug a little deeper for this one. His vocal delivery is stronger and seems to have picked up a touch of country twang, possibly a side effect of owning a home in Nashville.

His playing, meanwhile, is on career-peak form.

“I try to avoid playing slide at all costs,” Bonamassa confesses, dryly. “Kevin [Shirley, producer] always goes, ‘Play the slide.’ And I’ll say, ‘I don’t want to. Can I throw this thing away?’ My favourite slide players are Ry Cooder, David Lindley and Jeff Beck – those three. Ry Cooder, he plays one thing and it’s soul-melting.”

Redemption is out now via Provogue. Joe plays Glasgow Armadillo on 22 April and London’s Royal Albert Hall from 24 to 26 April. Tickets are available from www.jbonamassa.com/tour-dates