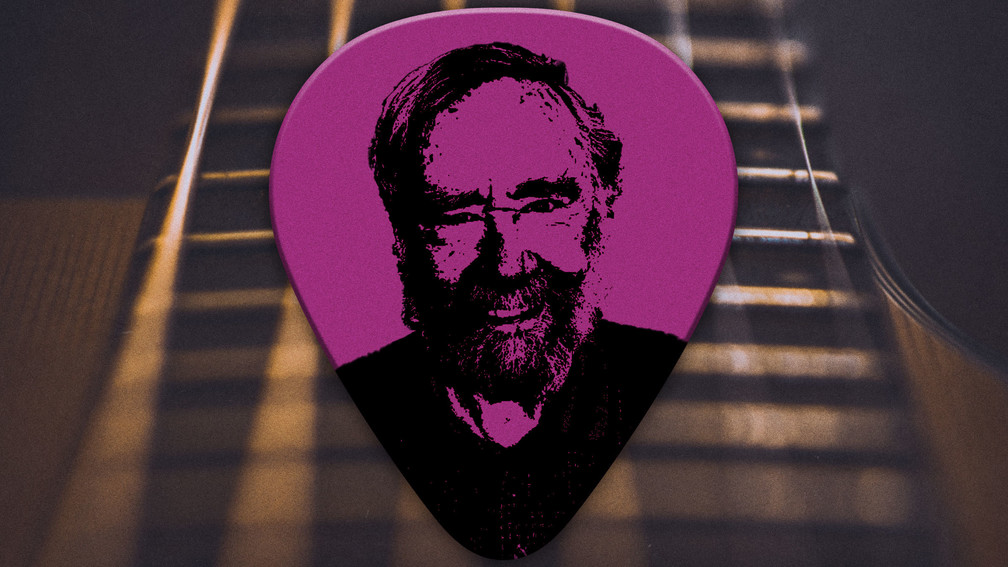 Immigrant from Scotland, the young Jim Dunlop founded the Jim Dunlop Company in 1965 as a part-time company while working as a chemical and processing engineer at Barr and Stroud in Glasgow. His first product was the Vibra-Tuner, a small device that attached itself to a guitar with a suction cup and showed if the guitar was in tune with the vibration of a small reed.

While he was visiting music stores to sell his new product, someone told him that the musicians needed a good capo, pointing out that anyone who created a good capo who could handle a 12-string guitar would make a lot of money. Using his engineering background, Dunlop created the toggle capo, and then collaborated with a local workshop to build the first molds for the capo, manufacturing what eventually became the “1100 Series” capo.

As for the capo, the idea of producing a plectrum came from outside. A Berkeley guitarist, Jon Lundberg, told Dunlop he was supposed to design a National-style metal thumbpick. They were not producing them at the time, so Jim Dunlop got to work again. He has patented a new design and produced 6 plectrum calibers. At that time the thumbs were used for measurement and you had only three options: light, medium or heavy. Jim decided it was inefficient and gave the player little freedom of choice. He then moved to millimeters and began to make a wider range of thicknesses, each made with the precision he was used to as a machinist. It was a move that helped him create one of the greatest empires in the world of guitar accessories.

When the tortoise shell, which was used as the material for the best picks, was no longer available, Jim Dunlop began experimenting with synthetic materials and created a kind of plastic he called Tortex. Later this plectrum will become the number one in the world and will remain there until today. The material created in the process was more resistant than traditional celluloid and harder than nylon.

In the 1990s, many bands like Metallica, Alice In Chains and Nirvana used only Tortex picks.

In the 80s Cry Baby had some financial problems, their pedals were not sold for several months. Jim Dunlop decided to buy the company to continue the tradition of great pedals but with the same kind of attention that all Dunlop products have received. It was a bit of a technical obstacle to introduce the kind of quality control and consistency required by Dunlop, but eventually led to the creation of the world’s number one pedal and to add even more to Jim Dunlop’s legacy.

Dunlop bought MXR when the company was suffering from economic problems due to the fact that many musicians at that time preferred. Having already had positive experiences with Cry Baby, he knew exactly what to do. He renewed some technical aspects, introduced a couple of new solutions and, as always, he made use of the support of important guitarists, like Eddie Van Halen, and their intuitions.

Jim Dunlop leaves a fundamental legacy for the whole guitar world. His inventions are destined to remain forever in the hands of all guitarists!